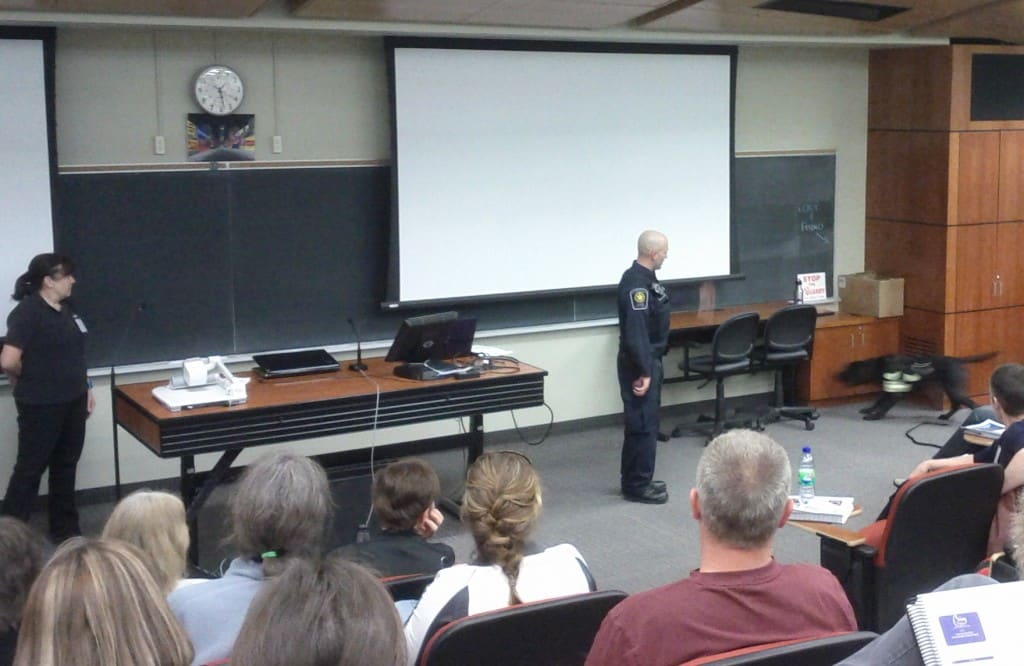 I just came back from the third and final day of the Professional Animal Behavior Associates symposium for 2011 – this year, the presentation was focused on working dogs (search and rescue, detection, etc.) I’ll let you read about the lineup here. The PABA conference draws a lot of folks from across Canada, including my friend Katherine Mutzke from Clever K9 Sports in Squamish, BC, Alice Fisher of Dogsmart from Vancouver, Carolyn Clark, Karen Pryor Academy Faculty, and Nicky Barnham of Carolark in Ottawa.

This year I knew I had to go, because I knew absolutely nothing about the topics being presented, and only knew of one of the presenters speaking (Steve White). Having no expectations going in, I went in and right off the bat with the first speaker I was delighted with what I was learning!

The headlining speaker that I found brought the most new information to the table for me was Dr. William “Deak” Helton, the author of “Canine Ergonomics – The Science of Working Dogs“. He had a ton to say, and MOST of what he said I had never heard of before – enough to fill multiple blog posts for weeks… so in the interests of brevity I am going to write about his discussion of the Viligence Decrement. I believe it has tremendous application to us in pet dog training, because it can explain why our dogs fatigue and stop working in class or in dog sport. In class I often point out to students that their dogs “look fried” or “check out”. Here, a scientist was actually going to explain what might be going on in our dogs when this happens!

(Before I begin, you have to understand a bit about my background – I stopped taking sciences in Grade 11 – public school, I focused on Liberal Arts, and in university, I majored in business. So go easy on me if I get anything wrong)

Vigilance Decrement – What is it?

Vigilance decrement is defined as “deterioration in the ability to remain vigilant for critical signals with time, as indicated by a decline in the rate of the correct detection of signals”

In real life, it is as simple as an airport security officer missing contraband items hidden in baggage under x-ray, or a working dog failing to detect and indicate the presence of a landmine. For the airport security officer, that might be the shape of items on screen that fuzzily match what contraband looks like. For a detection dog, that might be the scent of a landmine. In both cases, shapes and smells are just signals.

In my opinion it’s reasonable to assume that a verbal or visual cue is also just a signal. A cue is a signal to indicate there is an opportunity to perform a behaviour and earn reinforcement. Why would a dog respond to a cue one minute, and assuming motivation is sufficient, and the cue is delivered identically, why would a dog not respond to the cue?

Important to note – we are always assuming that the learner is sufficiently motivated. For training, we would assume the food is appealing enough, or the toy desirable enough to want to continue doing work.

The first theory is boredom. The task is so easy and repetitive that the subject withdraws effort and stops paying attention – and the subject is then distracted and daydreams.

Helton does not believe the boredom model holds true. If it held true, you should get greater vigilance decrements if you gave people easier tasks vs. harder ones. In fact, the opposite was true – in studies with humans (male and female) and rats, the harder the signal detection test, the faster the decrease in performance.

In plain English – if I gave you a book on quantum mechanics and said “hey read this”, you’d probably look very bored by page three. But it’s not because it’s too easy – it’s because it requires a ton of mental energy to follow it.

Applied to dog training? In class, many students (especially newer ones, with greener dogs) often attribute the dog’s unresponsiveness as boredom. If a dog stops responding to a known cue in class, assuming sufficient motivation, it’s NOT because their bored, but in fact, have run out of mental energy. I believe their brain is no longer detecting the signal/discriminative stimulus.

Evolutionary Function of “Shutting Down”

Simple! As Helton explained, the brain is not unlike an engine. Excessive use will cause damage, so by shutting down, it is protecting itself. The brain, literally, heats up from use, which is why brain damage can occur with high fever, and we’re mentally more capable if the brain is kept cold. Helton shared that you can measure the temperature inside the ear canal as an accurate way to monitor when the subject is going to burn out!

Through rest! That’s why agility people swear by Crate Games – so mental energy is preserved or restored between performance.

The likelihood of the subject to start “daydreaming” or focusing on off-task activities increase as resources decrease. Just like in my last post – where Petey only noticed the bowl of food in the training area at the very end of the training session. Ignoring distractions requires frontal lobe capacity – going for the food bowl is a “lizard brain” type decision. Using the frontal lobe draws on mental energy, and once depleted, lizard brain kicked in.

A Model for Predicting Detection Success

Drawing from human-models, Helton shared his model for predicting whether the expert (in this case the detection dog) would correctly respond:

Salience = How big/obvious is the target?

Body Movements = How much does the dog have to worry about navigating the environment while working? i.e. searching in dangerous rubble vs. a lab environment

Expectations = If you only train the dog to search the floors, he’ll never think to sniff up high where the item may be hidden

Value of Information = I think this means the importance of the consequence to the dog – What’s in it for me if I respond?

Applying his Model to Scent Detection

Rather than have the dog do the search on-site, Helton suggests the dog could stay inside a controlled laboratory environment, and just be given air samples of the targets to smell inside the lab. For container search, for example, air samples of containers could be captured and then brought to the dog to sniff one by one. The salience increases, and body movements are minimized. Another example would be for detecting breast cancer. Rather than have the dog sniff the actual patient, patient breath samples would be collected, and then sent to the dog.

In Norway, there is a company that is doing this – they call it RASCO – Remote Air Sampling for Canine Olfaction.

Applying this Model to my Training

I have thought about how I might apply this to training (and already do):

Salience = make cues easy to discriminate for the dog. If verbal cues, avoid using similar sounding cues (down and bow). Keep them clean and consistent so mental energy doesn’t have to be wasted thinking “was that really the sit cue? or was it something else?)

Distractions/Interruptions/Noise = I think that anything that causes mental energy to be expended, either consciously or subconsciously, will cause performance to drop quickly. So that’s why we follow good training practices to train with high intensity and make it easy for the dog to focus and preserve mental energy.

Expectations = I think this closely relates to the process of generalization and gradually training in as many environments, with as many variables (over time) as possible.

Value of Information = This is just creating good reinforcers, to make sure that our cues are worth paying attention to and acting upon.

Should I put an ice pack on Petey’s head between training sessions? Or right before we do our runs at the CARO trial?

Caffeine reduces vigilance decrement in people AND honeybees (yes, it was in the presentation). Caffeine pills for Petey before training sessions or at least trials?

The Canadian Border Services Agency’s detection programs were created with the help of the University of Guelph. Their dogs are trained using positive reinforcement – they work for a ball! Three working dogs were brought for demos over the course of the weekend. This black lab cross was too much for his past owners – not a good house pet for the average dog owner – but perfect for working dog life – and worked like a champ looking for currency in the room (he catches people that lie when they say they aren’t carrying over $10,000 in currency).

The next post I’ll do about this topic will delve into Helton’s findings regarding breeds and dog characteristics and their intelligence and suitability for work. As a Beagle owner I loved hearing this. Maybe I don’t need that Malinois after all… ?

4 Replies to “Why Can’t My Dog Stay on Task? (The Vigilance Decrement)”