This weekend I caught up with a couple that had taken group classes in the summer. Their roughly two year old rescue lab mix had been doing great. Right after adoption, leash pulling was their major problem, and they were proud (and I was pleasantly surprised!) that just six months later, the dog walked on a loose leash, even on the way to the dog park, and all they did to create that was click then treat for walking on a loose leash (They were able to totally fade out food reinforcement for leash walking very quickly they remarked).

They hired me for a private lesson because they observed and their dog walker observed that their dog was being rude with other dogs at the dog park. First, lots of mounting and humping. Second, chasing down and harassing dogs that were nervous or had “given up”. Third, grappling other dogs by their collars during wrestling.

Our appointment was for 3pm on Saturday afternoon, and after meeting at the school, we walked towards Trinity Bellwoods to enter the dog bowl – the official off-leash area for dogs in the park, so I could observe their dog’s behaviour and offer suggestions on what to do to improve it.

We started off by having her to some basic exercises (sit, down, offering attention, etc.) and then we released her to go play.

She found a Golden Retriever and proceeded to wrestle, and very quickly mounted and humped him. “Too bad!” I said, as I went to get her, moved her away by her harness, and leashed her up. Timeout time.

We tried again in a minute, and this time she ran into the mix of dogs at the park. Within a few seconds, a Doberman, German Shepherd, and Rottie mix started chasing her. It was starting to look ugly. She ran and ran, and eventually came to a halt, and offered appeasement signals (c-shaped spine, head low, whale eye, pinned ears) and the pack of three dogs wouldn’t let up. I ran into the group and physically shielded her from all three, and the owner of the Doberman saw me do this and proceeded to collect his dog. The remaining two dogs moved on by themselves. Their owners were absent. 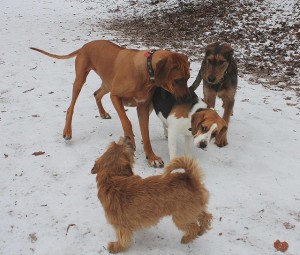 She looked just like the Beagle in this picture. Owner intervention required ASAP!(Photo courtesy of Paivi Reijonen)

I moved with my clients’ to the other side of the bowl and we let her go again. This time, she found a slightly smaller mixed breed dog and started giving chase. She was now chasing down a dog and making him feel uncomfortable! The same appeasement signals were being offered. We jumped in and quickly timed out our dog. What a hypocrite, we all thought!

Off in the distance, the three dogs that were bullying my clients’ dog were doing it to somebody else’s dog, but this time, no one was intervening. We had enough distance so I wasn’t concerned about my clients’ dog’s well being. But somebody’s dog was not very happy.

On the way out, our clients’ dog went to visit the German Shepherd. He told her off, hard, just because she entered his space. She got the hint and we moved on. Another dog went to visit the German Shepherd, and he got told off. I quickly realized that the Shepherd was resource guarding his owners. Yet they had brought their resource guarding dog and were just sitting around the dog bowl thinking nothing of it.

THIS is What Goes On?

I don’t go to these parks with my own dogs. I forget what goes on in places like this. Enclosed spaces devoid of anything interesting where too many dogs hang out – understimulated by the environment, but overaroused by other dogs. Too many people think that these dogs are playing and having fun. They were not. There was serious bullying and overarousal going on.

Today at lunch something connected. I get a lot of aggression cases where clients report that their dog was “well socialized” and spent a lot of time at the dog park. What I came to realize is all the owners with their dogs at the dog bowl that day were there because they really think that’s what the definition of dog socialization is, and that’s what dog play looks like.

If you took the average dog and had them stay in a poisoned environment like that for any length of time for weeks or months, I would be surprised if that dog did not develop an aggression problem. All that happens is dogs get bullied, these dogs learn that other dogs can be dangerous or threatening, my owners don’t help me at all, and the only way to get relief is to fight for it.

This is a video from a nearby park of two dogs meeting. One is trying a bit too hard. (OK, mine, the Beagle). The other dog offers some calming signals (head turn, look away, lay down) to communicate some discomfort. For the most part the Beagle backs off and the video ends with him reciprocating a head turn. After that the two just went off and did their own thing.

This is a video of Rachael taking a group of dogs out for a hike. This would be a great example of an alternative to being taken to a concrete, paved dog run.

THIS is NOT Healthy – But Sadly Normal at Dog Parks

In this above video by Sue Sternberg, you can see a small dog doing appeasement gestures and clearly asking for help.  Owner intervention is required immediately. If I owned the little dog I would body-block him and even just pick him up and immediately leave the park. If this dog is repeatedly taken to the dog park and experiences this, I have no doubt he will develop a serious dog aggression problem very quickly.

“Oh, but that’s how dogs play”

“Your dog needs to toughen up!”

Too commonly heard at places like the dog bowl. All wrong. That’s why I don’t go to places like that anymore, especially when it is busy.

Recognize Oncoming Disasters When You See Them

This is why I cringe a little when I hear of my clients’ taking their puppies to the dog park. I hope they have learned what we have taught them in puppy class, so they can identify what is good play and what is bullying. I also hope that they don’t unlearn due to the off-repeated mantras that well-intentioned but really uneducated owners parrot at dog parks. This Saturday afternoon at the dog bowl was a mess. Recognize a disaster in the making when you see it and keep your dog safe. Socialize, don’t traumatize your dog.

(Updated – Nov 19: A couple of commenters with a good eye did point out that the original video I used from puppy class wasn’t the best example. http://www.youtube.com/watch?v=WehLVdUPHpc – Things pointed out were tail tucked, trying to climb into person’s legs etc. for relief. So I am switching it out for another video that is a better example,  I hope. The Springer and Beagle were good friends by the end of class and in future socialization classes though, so don’t worry about her!)