We’re Thinking About Getting A Puppy.. Any Advice?

A couple of months ago I got an email from friends saying they had been thinking about it, and they wanted to get a puppy. They wanted some tips and also some feedback. They recently found a breeder that was selling Golden Doodles (Golden Retriever/Poodle crosses) online and they had went to visit the breeder to see the puppies. Here’s what they said they saw:

They had the good sense not to make an impulse decision, so instead they went home and emailed and asked what I thought.

I broke it to them and said they had basically visited a back yard breeder/puppy mill operation.

Sorry To Break It To You, But…

Other than the animal rights aspects of this (see horrible puppy mill video here) why should anyone care? These backyard bred puppies weren’t abused at all. They were just raised by people who got two dogs together and made a litter. We’ll get them at 8 weeks old and do a great job at socializing them and training them, and live happily ever after, right?

What Happens Before 8 Weeks Matters a Ton

Grisha Stewart, her in book, Behavior Adjustment Training, talks about her own dog, Peanut. She rescued Peanut from the shelter at ten weeks old. Peanut ended up being severely dog and people reactive. How could this be? She was a professional dog trainer, and she took him to two six-week puppy classes and two six-week adolescent dog classes. She used systematic desensitization and classical counter-conditioning to try to help Peanut get over his fears. The problems began before Peanut was even born.

Genetics: Peanut’s mother was so fear-aggressive, the shelter had to euthanize her.

Chemical Stress in Utero: Peanut’s mother lived in presumably not-so-nice conditions when Peanut was in-utero – this stress affects the development of all the puppies she was carrying.

Environmental Stress: From eight weeks to ten weeks, during a critical developmental period where puppies start becoming aware of danger, his entire litter was exposed to a building full of fearful dogs, and he was also neutered at eight weeks old. Not a place or a procedure for a young puppy to learn the world is safe and wonderful.

Basically, much of how your puppy will turn out is determined before you even take your puppy home. Therefore, where you get your puppy matters a ton.

(FYI, Peanut is a therapy dog now. But it took her jedi-like skills to make it happen and in doing so, she created an entire protocol for helping dogs get over fear.)

When you have determined what breed you want and what is appropriate for you (a whole separate topic), start looking for a breeder and think about all the things that Peanut had against him.

Genetics – What were the parents like? Are they health tested? Are they therapy dogs/CGN titled? Sport titles?

In-Utero Stress – What kind of environment does the bitch live in? (Imagine what it must be like to go through the gestation period inside a filthy, uncomfortable puppy mill with dozens of other barking dogs, or be in an uncomfortable backyard shed, isolated from social contact)

Responsible breeders also take measures to reduce pet overpopulation. This can be done by offering to take back the dog at any stage of its life (it puts the onus on the breeder to select appropriate homes for each puppy) and possibly through a spay/neuter clause in the contract.

Two years ago I hosted a Puppy Socialization Party for a 7-week old litter of Icelandic Sheepdogs from Solhundur Icelandic Sheepdogs. Prior to leaving the litter to go to their forever homes, these dogs have been on car rides, to a dog training school, met dozens of people (house visitors to their house, as well as people out and about) and had even had some beginner clicker training.

This past winter break, Rachael and I were invited to go to a Puppy Socialization Party at Van Wijn Tuin Dutch Shepherds. In this video you can see the puppies live inside a home environment, where they are exposed to a variety of surfaces, meet a variety of people (including one child this evening), have all sorts of cameras with flashes point at them, and have these strange house visitors even feed them to start building positive associations with strangers.

Responsible breeders have to put in so much more effort than their kijiji/puppy mill counterparts. Consider the amount of work to be done… it is literally a full time job for months for one person to properly raise a litter of puppies in a textbook fashion. This socialization has to even include being taken off property to other places (in a safe fashion, taking into consideration risks of disease). 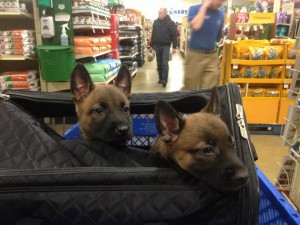 These puppies will have been exposed to almost all of the items of Dr. Sophia Yin’s Socialization Checklist  before they have even left the litter. How lucky are these guys vs. their backyard breeder counterparts?

Let’s say you do this perfectly – you find the best breeder that has litter after litter of champion show dogs, agility superstars, and therapy dogs with brilliant temperaments, and they raise the litter according to procedures such as the Puppy Prodigies Early Learning Program – and then you take the reigns and enroll in a high quality puppy socialization program and continue the process of careful socialization and training – all of this is no guarantee of the perfect dog.

Mother Nature can have a way of throwing you a curve ball. Casey Lomonaco, writer, and dog trainer/behaviour consultant extraordinare, did everything textbook with her puppy, Cuba, yet when he hit adolescence, he started exhibiting highly reactive behavior in very strange situations. You can read about her experience here: http://www.rewardingbehaviors.com/2012/10/06/voyage-with-cuba-the-next-leg/

Close to a Sure Thing: Adopt a Mature Dog

This is just my opinion, but I believe that if you want to maximize the chance that you’ll end up with a dog that fits your ideal lifestyle, the best way to do this is to rescue a mature adult dog. In particular, a foster-to-adopt arrangement would be ideal, since oftentimes, problem behaviors are suppressed until after the dog has been placed in a normal home environment. A four year old dog, confirmed to be good with children, is likely to remain good with children for the rest of his life. A three year old dog that sleeps at home calmly all day, is likely not to develop separation anxiety later in life. A two year old dog that loves tug, loves food, and loves training, would probably make a great project dog for dog sports.

That being said, even this is no guarantee, since fear and anxiety can be learned (my seven year old Petey, who is totally neutral towards dogs, could be attacked savagely by a dog tomorrow, and become dog aggressive because of it) or develop with age (changes in visual acuity, pains and discomfort, dementia, etc.) Many of my clients’ own dogs started off being good with all dogs, but due to repeated attacks or being charged by off-leash dogs, learned to become aggressive.

Regardless of how you end up with your dog, you chose him, not the other way around. He didn’t ask to go home with you – it was your decision and yours alone. For that reason, you have an obligation to stick with them right till the end. And, if you care about the welfare of animals, and you don’t want puppy mills and backyard breeders to produce litters of fearful and aggressive dogs that end up in shelters, where you get your puppy is what makes the difference.

My friends ended up finding another Golden Doodle breeder. Some key differences – the litter was being raised in the family house, where they were exposed to people all day long, as well as the sights and sounds of a household. They were able to meet the parents. And, the puppy is doing great in puppy class – fearless, loves to play, self-regulates arousal, accepts handling and restraint, likes people, and is pretty easy to train. They have “normal” puppy challenges such as house training, inappropriate chewing, nipping etc. I hope that they never have to worry about fear, reactivity, and aggression problems. Otherwise they might have to become professional dog trainers to develop the skills to overcome them.