Why has my dog started getting into fights at the dog park?

Is he dominant? NO…

Why has my dog, who used to love other dogs, started to get into fights at the dog park? Is he dominant?

Dominant? Usually not. Few dogs are born wanting to get into fights. Fighting behaviour is evolutionary suicide. So why has my dog started barking, lunging, and biting other dogs at the park?

There could be many reasons –

He’s not feeling well. Dogs are very stoic and hide discomfort very well. Make sure he’s been recently vetted and isn’t suffering from pain ordominant aggressive dog illness. If he is ill, dealing with the medical condition can often make the behavioral issue go away. 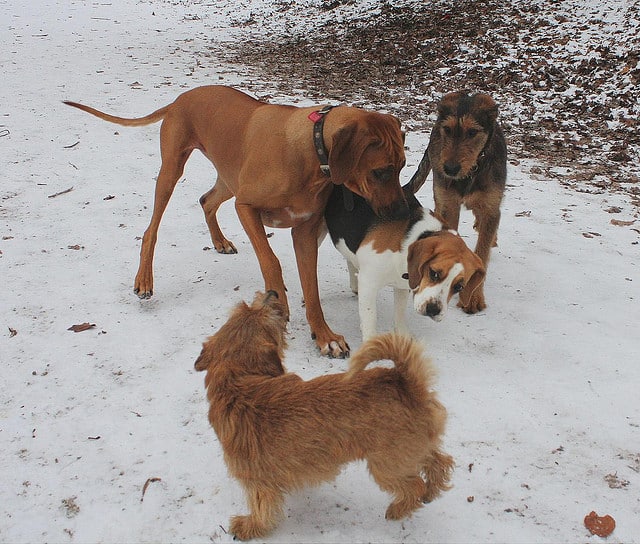 But I heard socializing your dog is very important! It absolutely is… BUT…

Socializing your dog at the park is a good idea, but it requires careful monitoring of his body language and selection of play partners. Our puppy socialization class teaches owners how to watch for these warning signs and ensures your puppy associates nothing but good things with other dogs. Overly rough play and bullying can just teach your dog to dislike other dogs. Young puppies also tend to be picked on and bullied by other dogs, which can teach them to be fearful of dogs – exactly the opposite of what you’re trying to accomplish.

If your dog has already started exhibiting aggressive behaviours towards dogs, don’t delay and ask us for help. The longer you allow your dog to practice these behaviours  the stronger they become, and the harder it is to undo.

Want to discuss your dog and your specific situation? Book a phone consult with one of our behaviour consultants: