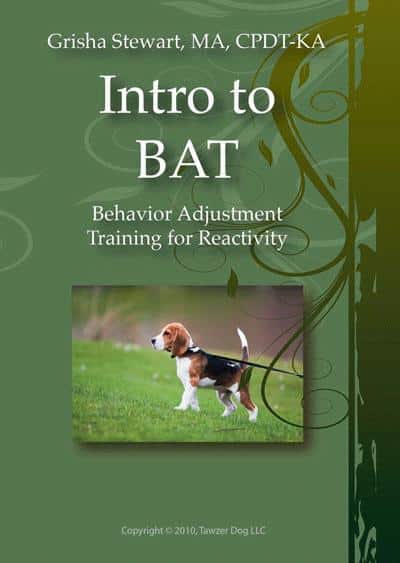 As many of you may know, my rescue Beagle, Duke, is dog reactive.  Initially, he was fearful and aggressive towards dogs in all settings (off leash, on leash, at the dog park, anywhere!) and before we began working with him, the mere smell of a dog (a dog’s scent lingering in the hallway of our condo even thirty minutes earlier) would trigger a howling fit.

At the time, the commonly prescribed approach to address dog reactivity was to train alternate behaviors (Watch Me, ignore the dog) and also desensitize and classically counter-condition new feelings towards dogs.  Books like Feisty Fido by Patricia McConnell and Karen London, Fight! by Jean Donaldson, and Click to Calm by Emma Parsons covered these protocols in great detail and are very well-read in my library.

Next, Control Unleashed by Leslie McDevitt introduced another tool – rewarding the dog for looking at the scary/hated dog and putting that on cue with “Look at That!”.

Along the way, we got Duke’s reactivity down to a point where walks became sane again and Duke was able to return to attending group obedience classes.  But, after nearly four years of working with him, his reactivity is reduced, but not cured, and he is what I’d call “manageable”, but still requires a lot of management.  Many dogs (including ones I’ve been hired to help with) DO become “cured” from this work but Duke isn’t there yet.

Recently, I ordered and viewed Grisha’s first DVD on the subject – Behavior Adjustment Training (BAT) for Fear and Aggression from Dogwise.com.  This DVD is a live recording of a lecture she did on BAT in Novato, California, in January 2010.  It is NOT intended for average dog owners (its way too dog-geeky) but is a perfect watch for professional dog trainers and behaviorists that have a solid understanding of operant conditioning and classical conditioning.

In a nutshell, Grisha explains that reactive dogs have learned that lunging and barking sends scary things away.  Either the handler, due to embarrassment and wishing to stop the dog from rehearsing unwanted behaviors, backs away and creates distance when their dog reacts – or the scary thing (the other dog owner, for example), leaves because they are afraid of the lunging dog.

In dog-geek terms, using the Antecedent-Behavior-Consequence model we have:

BAT is all about changing this sequence to:

There are three stages of BAT, which I won’t go into detail with here – but in its third, purest stage, no food or toys are used.  The simple functional reward of being allowed to leave by offering an appropriate calming signal is the sole reward.

When I first heard about BAT, I found the concept interesting, but I am delighted to say that with some preliminary exercises I did with Duke, the results have been quite positive.  Today, by coincidence, just before completing this blog entry, I had a chance to work with a reactive dog client with some ad-hoc BAT exercises at the nearby dog park.  Both of us were extremely pleased with the progress we were able to make in decreasing distance and keeping the dog calm and under threshold.  The relaxed body posture and demeanor of the reactive dog was significantly different than when we previously were using traditional food-based classical counter-conditioning techniques.  The dog’s owner commented on our swift progress and how much her dog seemed to “enjoy the game” of BAT.

I look forward to working more with BAT and sharing this new technique with the reactive dog owners in our community.

For average dog owners wishing to learn more, Grisha has put out a second DVD called Organic Socialization that appears to be better filmed and presented in a way that average dog owners can absorb and comprehend the information.  That being said, for this or any other aggression issue, consult a positive reinforcement trainer or behaviorist that has a solid understanding of operant conditioning and classical counter-conditioning when you get started.

Here is a short clip from Organic Socialization including a brief clip from a real life BAT session:

And discuss BAT and similar techniques on this Yahoo! Group: 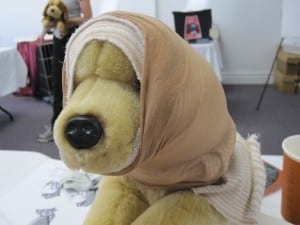 I cancelled classes at When Hounds Fly weeks ago so that today, I could complete a course on Pet First Aid, issued by Walks ‘n Wags Pet Care and taught by Renee DeVilliers of All About Dogs.  The course covered topics ranging from preventative strategies, emergency restraint and transport, bandaging skills, bleeding, airway obstruction, mouth-to-snout, CPR, ingesting toxins, overheating, and a lot more.  It was a long day!

Here are pictures of my handiwork applying bandages to my stuffed animal:

Here, Renee is showing us how to dress a wounded tail.  Cadence is wearing a pair of granny stockings and is handling it quite well.

It was a content heavy course so I won’t even try to summarize what was covered in any great detail.  But, here are the top three interesting and easily digestible facts that I learned today that I wanted to share with you though:

Pet First Aid is taught almost monthly at All About Dogs so contact them about getting on the list for the next session if you’re interested!  And if you’d like me to dress your dog’s head like the stuffed animal I did for photos, just for fun, let me know.

A couple of weeks ago I received a phone call from Krista Macpherson, a dog cognition researcher from the University of Western Ontario.  She found When Hounds Fly and reached out to us because she was looking to partner with a dog trainer with a sound understanding of science-based dog training.  I was floored!

After meeting with her last week and geeking out over dog cognition and experiments, she shared two published studies she worked on.  The first was a radial maze study that was published in Science.  The other was published in the Journal of Comparative Psychology and it asked whether Dogs seek help in an emergency (the popular press picked it up and coined it the Lassie Experiment).  Owners faked heart attacks and also faked having bookshelves fall ontop of them.  Unfortunately, the dogs didn’t go out and seek help like Lassie would.  Oh well, that just means we can train “Get help!” as an operant behavior, put it on stimulus control, and have it handy just in case.

I’m so excited about this project for a bunch of reasons.  Firstly, clicker training exists because of the work done by scientists like B.F. Skinner in the 60s.  Without science, we would still be stuck following archaic training methods prescribed by old-school compulsion trainers like Koehler or the Monks of New Skete.  Secondly, having an affiliation with a researcher from the University of Western Ontario will help undecided dog owners make a good decision to enroll their dog in a humane, positive reinforcement dog training school instead of choosing a yank-and-crank compulsion trainer.  Lastly, the geek in me (I trained a goldfish after all) gets fired up at the thought of helping run science experiments involving my students’ and friends’ dogs!

If you’re interested in volunteering and having your dogs help out science, check this article out on our main site and let us know.  https://www.whenhoundsfly.com/resources/articles/75-caninecognitionexperiments.html 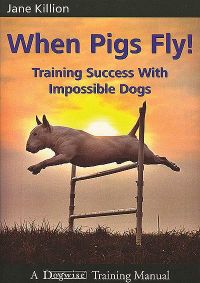 This is the book that inspired the name for the school!  Years ago when I got my first beagle rescue, I was struggling to get him to hear his name while on walks, nevermind train a loose leash walk.  While walking on King Street, a woman driving by slowed down, rolled down her window, and said “Don’t bother! Beagles can’t be trained! They pull!”

If this sounds familiar to you, and you look in wonder why that neighbourhood Poodle,  Border Collie, Golden Retriever, or German Shepherd are so naturally attentive to their owners, this book is for you.

Even if you happen to have that “naturally obedient” dog, this book is for you.

Of all the obedience training books I have read in the last few years, this is the most concise, clearly written training manual for dog owners of all levels.

Firstly, the book helps you understand why certain breeds are predisposed to handler attentiveness while others aren’t.  Killion coins those dogs (the Collies, Shepherds, etc.) as “biddible” dogs, selectively bred for their ability and desire to pay attention to their handlers and follow instructions.  Conversely, terrier and hound owners have “non-biddible” breeds that have been selectively bred for work that does not require handler instruction.  She gives new meaning to the phrase “Release the hounds!”.

Secondly, Killion gives readers a clear and concise explanation of the laws of operant conditioning and clicker training, and specifically calls out the importance of using shaping techniques, not lure-reward methods, for non-biddible breeds.  Non-biddible breeds are known for being stubborn, and as a result, training using shaping takes advantage of their natural breed characteristic of never giving up.  The truth is, ALL dogs, biddible or not, learn better with shaping, so this is particularly why this book should be recommended reading for any dog owner looking to train their dogs.

Lastly, Killion spends the majority of the book on focus and attention, work ethic, and using real-life rewards to train our dogs.  Some obvious examples are using sniffing for Beagles, jumping in a lake for Newfoundlands, or even jumping up and wrestling.

Hands down, this book is now my top recommendation for dog owners who are new to training.  It is concise and easy to digest for casual dog owners, but without insulting their intelligence by omitting key concepts.

This is our first post!  We decided to create a separate blog from the main When Hounds Fly website.  The purpose of this blog is to allow us to more frequently update the community about things that we discover along our journey and mission of helping dogs and their owners live happier lives.