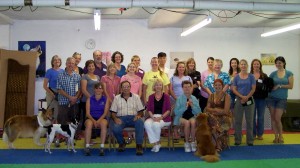 On Friday, July 29th, 43 clicker trainers (Karen Pryor Academy Faculty, Graduates, and some of their friends) from the Northeast travelled to Endicott, NY for the first ever Karen Pryor Academy graduate reunion at Clicking With Canines. Mirkka and I made our way from Toronto (it’s about a 7.5 hour drive) to attend. I left the Beagles at home so it was just her Aussie, Forbes in the back.

Although very casual in feel, the weekend was extremely well put together. It’s thanks to Steve Benjamin (Faculty, and my instructor), Casey Lomonaco, Donna Devoist, and Abbie Tamber for putting in a ton of hard work to make it an amazing weekend! Obviously much of the weekend was educational in nature, so here’s a little bit about what I learned:

Separation Anxiety is a big topic and rather than cover the basics (that many readers of this blog will already know – if you want a primer, check out this article I wrote a while ago.

Jules asked a number of rather socratic questions and also made many interesting assertions – here they are:

A common cause of separation anxiety is bad experiences during the departure. That could include a cat that beats the dog up, a thunderstorm that occurs while left alone, or, even the return of an abusive owner (i.e. a previously happy dog is sitting on the couch chewing a shoe – owner returns home and proceeds to beat the snot out of the dog – now the dog is anxious when he’s alone because the return of the owner could happen any time).

Jules is not a fan of plain old desensitization (planned departures without the use of any food or reinforcement). Rather she suggests counter conditioning (which means use food in the planned departure).

Give your anxious dog avenues to calm themselves down. Destruction is self-calming behavior, which is why dogs with separation anxiety destroy things. Redirect their self-calming behavior to appropriate objects (buster cubes, food dispensers, etc.) She also asserts that if a dog has a dog door to the yard, and can actually verify the owner is gone, they tend to calm quicker. Chewing, digging, running around, etc.

Poisoned cues – I wrote about this here when I attended Kathy Sdao’s lecture last fall – you can make a dog afraid of food, food toys, or certain behaviors if you cue them prior to leaving. A great way to kill a dog’s stay is to cue a down-stay and then leave.

Confidence training – teach separation anxiety dogs out of sight stays, or send-outs, so they develop a strong reinforcement history for leaving the owner.

To walk or not to walk – in my own article I suggest exercising a dog prior to leaving them home alone. She posed the question “to walk or not to walk” and it is dependent on whether being outside creates more anxiety in the dog. For example, if a dog is generally anxious and could spook by being out there (reactive to dogs, cars, people?) then walking first prior to departing would only make their anxiety greater at home.

Lastly, Jules stated she is supportive of the use of medication for cases that call for it. Fluoxetine, Clomipramine, Benzodiazepines – drugs can lower threshold so the behavior mod works. In some cases, dogs are just genetically predisposed to being highly anxious and medication can help them relax in other situations where they are under a lot of stress.

I did a brief presentation on how I started and grew When Hounds Fly to where it is today. Sorry, you just had to be there for it!

Leanne gave us a glimpse of her world – her dog shelter – where she has implemented extremely progressive training, management, and enrichment programs.

A stark fact she shared is that the majority of dogs surrendered to shelter were only with their owners for 3 months. The majority are between 6 months to 2 years and are showing early signs of aggressive behavior. In New York State, Jack Russell Terriers, German Shepherds, Huskies, and Pit Bulls make up the majority of breeds surrendered or picked up as stray.

Training implemented: Dogs are clicked and treated for being quiet, and sitting when greeted. Unlike most shelters, her shelter is quiet, and dogs know to sit for attention. This increases the likelihood of their adoption (no one wants a barky dog that will knock over grandma). Dogs are required to sit for everything (sit for harness, sit for kennel door opening, etc.) and dogs are taught impulse control/zen around toys.

Environmental Enrichment: Their outdoor area has been setup like an agility playground and staff and volunteers take the dogs out when it’s there turn for outside play. Inexpensive food/puzzle toys are used, such as a muffin tray with tennis balls (treats are hidden under the tennis balls). Dogs also take turns actually spending time with staff in the office side of the shelter, sitting in office chairs or curled up on the floor, meeting and greeting employees and visitors.

She also plays music like Through a Dog’s Ear, but also recommended Canine Lullabies (I had never heard of it before). Check it out.

Casey is very active in the (new) Treiball community and she gave us an intro to Treiball lecture. Treiball is a very new dog sport, imported from Germany, where dogs are directed by their handlers to push balls into a goal. Can’t visualize it? Just watch this video.

Perhaps the most interesting fact about this sport that I learned is that an untrained dog can easily puncture a Treiball inflatable. One hard paw or one nip and the ball is destroyed. So the crazier a dog is for a ball, the more time must be spent on impulse control. The first skill Casey focuses on teaching is a good strong hard push, without any pawing or biting.

The types of push training she’ll run dogs through include:

Then the inflatables are introduced – initially the balls are held stationary and nose touches on a target (masking tape) are shaped for precision and also push strength.
The other foundation behavior that must be taught is a solid send out. The dog leaves the handler, goes past the inflatables, and is expected to reorient to the handler and lie down until released to push balls.
As the sport is new, rules and regulations are just evolving in the US, but she also gave us a glimpse into the future, in where more advanced Treiball will include inflatable discrimination (the order in which the dog pushes each ball into the goal) obstacles (hilly areas) and possibly even relay teams (like Flyball). Very cool!
Laurie Luck (KPA Faculty) of Smart Dog University
Laurie Luck is a KPA Faculty Member from Maryland. She gave us a great introduction to the relatively new dog sport of Nose Work.
Nosework is great for all dogs, but especially those that can’t compete in traditional dog sports. Reactive dogs, handicapped dogs, old dogs can do nosework as dogs work one dog at a time while other dogs are crated in other rooms.
The foundation work for Nosework is to build a “search ethic” in a dog. How you start is simply getting a bunch of old shoe boxes and putting treats inside one – release your dog to sniff and find the box with treats. Once the dog has found the box with treats, go in and add more treats to further reinforce the dog’s search ethic.
The next step is to utilize classical conditioning to pair specific scents with treats. Anise, birch, and clover are the three scents used in nosework. By pairing the scent of clover with treats, the dog will eventually learn to seek out the box with the scent of clover alone. Dogs are also taught an indication behavior so that they can communicate to the handler when they have found the scent (i.e. sit next to the box with the scent)
The types of environments that nosework is done in consist of interior rooms, exterior spaces, a series of containers, and a vehicle.
Nosework is inexpensive, easy to get into, and doesn’t require a lot of space. Hopefully we can offer a nosework class in the future at When Hounds Fly!
Mo Carter – Bird Training
Mo shared a photo album of a trip she took to a bird training camp where they worked with various exotic birds.
Two things that I took from the presentation were: 1) These birds were free to fly away and escape any time they wanted, but they always returned to their handlers when released. 2) The bigger birds of prey are rewarded with mice!!!  Yuck!
Emma Parsons – Click to Calm Classes
If you have a reactive dog, you know who Emma Parsons is, because you’ve hopefully read her classic “Click to Calm”. In her presentation she shared course descriptions, physical setups, curriculum, and video clips of her famous Click to Calm classes she teaches in Boston.
There were three points that stood out and I made sure to remember from the presentation:
Staffing – The class nearly has a 1-to-1 assistant to student ratio. These classes are extremely labor intensive.
Cacophony of clicks – They are splitting like crazy. Click, feed, click, feed, click, feed. No lumping. The video clips made me like a bad lumper when it comes to my old boy Duke when I work on his reactivity.
Regression is part of the process – Relief for me… my own reactive dog, Duke, constantly goes through ups and downs. A few months ago we were passing dogs on the same side of the sidewalk with ease, and then for a number of reasons, became sensitized again – he’s on his way back to being able to pass dogs on the street again. It makes me feel better knowing that from Emma’s own experience, regression is not a failure or even necessarily a function of bad training.
The rest of the weekend was mostly spent outdoors – including an amazing twilight dinner and social at Steve Benjamin’s place (including a dip in his pond – where Deb Ross gave me some pointers on improving my front crawl) and the following day, Mirkka and I were at an agility workshop put on by Abbie Tamber, another KPA CTP who teaches agility in the area. (Other activities included Lure Coursing, Treiball, and a trail hike). I had so much fun just watching, when I returned home, I ordered a set of agility equipment for When Hounds Fly (weave poles, tunnel, four jumps, teeter) and am fired up about training Petey for agility. Pictures tell a thousand words so here are some pictures of Steve’s beautiful property:

And lastly a group shot! There’s a number of famous dog trainers there (and a dolphin trainer!)

Again thanks to all the Southern Tier NY State KPA folks for putting on such a big undertaking. Other faculty members are planning reunions in other parts of the country so hopefully KPA CTPs everywhere can have a blast like we did. Mirkka and I are working on something for Ontario-area KPA CTPs for 2012 already…

3 Replies to “KPA Reunion Weekend at Clicking With Canines”