Why is this dog sitting in the corner, not begging for food? 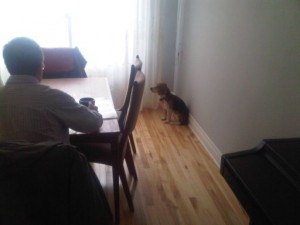 Dog Not Begging at Dinner Table

Why is Petey sitting patiently with his butt pressed against the wall in the corner, while my father enjoys his lunch and tea? Because of the effective use of operant conditioning (positive reinforcement quadrant only).

Dogs are scavengers by nature. Dogs came into being as scavengers of the refuse of human civilization. So, can we blame them for instinctively begging for food at the dinner table? It is a natural, instinctive behaviour that is in their genetic makeup.

How would a traditional, force and correction based trainer handle a dog that mugs you while you’re eating? Probably through the use of aversives (stuff that the dog does not like) which can include verbal correction (ennnn! noooo!!), physical correction (stepping on the dogs toes, hitting the dog in the face, choking it with a collar), or remote correction (spray bottle in the face, citronella collar, shock collar).

Depending on how food motivated the dog is, or how scary the aversive is to the dog, the behaviour may end, and it may end quickly. But at what cost to your relationship with your dog? And what has the dog learned? That humans at dining tables are dangerous.

So, how does a positive reinforcement trainer teach a dog to not beg at the dining table?

Firstly, I never fed Petey when he was begging at the dinner table. You do it once, or twice, and you have created a very powerful history of reinforcement for rewarding the dog’s persistence at bothering you while eating. If you suddenly stop feeding from the dinner table, you’ll find the dog is even more motivated now to bug you. “Hey, hellloooo. I am here again. Why aren’t you feeding me like you normally do? HELLLLOOO. What’s wrong with you? You fed me here last time. HEY!!! YOU!!!”.

So, after a few days after rescuing him, he realized that jumping on me, or sitting next to me, while I was at the dining table produced no results. That approach, in Petey’s mind, was a broken down dead end.

If you want a nuisance behaviour to end, you must, as a humane trainer, think of a specific replacement behaviour that the dog can do that is acceptable. If you just want the dog to “stop doing this, and stop doing that”, you are asking for an off-switch on your dog – which can be accomplished by just shooting it with a gun (hence the title for Karen Pryor’s seminal book “Don’t Shoot the Dog!”). In this case, I wanted Petey to sit in the farthest corner of any room that we were eating in and patiently wait.

Operant conditioning states that behaviours that are rewarded will be repeated with increasing likelihood. So, I simply kept a small handful of kibble at the dining table whenever we eat. When I spotted Petey heading towards the farther corner of the room, I clicked and tossed a kibble to Petey. After a few meals he came to learn that sitting the corner was the most likely place for him to be rewarded.

Next, after the behaviour was established, I began shaping for duration. I just kept my watch at the table. I found that Petey would sit still for about 3 minutes before breaking his sit, so I began only clicking and treating if he held his position for 3 minutes and 30 seconds. Then 4 minutes, then 5. At this point we can pretty much have an entire meal start to finish with Petey’s butt glued to the wall.

This whole process only took a couple of weeks, and we have prevented a common “nuisance” behaviour from developing into a pattern with a strong reinforcement history. Instead, Petey loves shoving his butt into corners now!