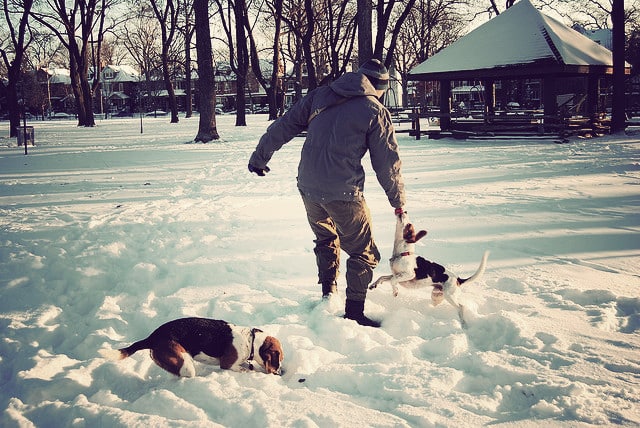 *December 6 update* – Just to close the issue on this, since getting clarification that the proposal is for “select” city parks to be given “courtesy hours” early in the AM and later in the PM, it is safe to say that responsible dog owners would be strongly in favour of this. This allows dog owners more options for legal off-use areas, and allows others to wish to avoid off-leash dogs a greater ability to avoid them, since where and when they are off-leash would be understood. Great for dogs in need of space.

Toronto city councillor Denzil Minnan-Wong made the news by suggesting that all city parks be made available for off-leash use by dog owners from 9pm-9am.

At first glance, this may seem like a good idea, and you’d think that any dog loving person would be in support of this. However, upon closer evaluation, this is a horrible idea both for everyone.

Four Reasons Why This Is A Very Bad Idea:

Minnan-Wong is correct in that there are too few dedicated off-leash parks in the city. As a result, in every community in Toronto, there are school fields and parkettes everywhere that are already being used illegally by dog owners as unofficial off-leash parks anyways. But, in these cases, they are usually free of children, joggers, cyclists, and other users of the park that would naturally come into conflict with off-leash dog owners.

In other places, such as the greenspace along the Martin Goodman trail, due to the high volume of cyclists and joggers, the vast majority of dog owners keep their dogs on leash. It’s a smart move anyways, since no one want to see their dog get run over by a cyclist, or have their dog chase down and bite a cyclist.

However, by making it officially legal to allow any dog off leash at any city park during that time period, there will be an significant increase in the number of runner/cyclist/child dog incidents. Many of these incidents will involve biting.

He claims that this works in cities like New York. But, as far as I know, only Central Park has off-leash dog hours. This leaves many other places for joggers, cyclists, and dogs who’d rather not play with others to enjoy, free from having to deal with off-leash dogs. A blanket rule that allows any dog to be off-leash at any city park is quite dangerous.

What I would propose:

The city should just greatly expand the number of approved off-leash areas to meet need. Perhaps officially designate a large # of city parks as off-leash areas during designated times. But, each park should be considered carefully, taking into consideration the other types of use it currently serves. This already happens unofficially.

For example, Dufferin Grove, by College and Dufferin, is not an official off-leash dog park, but, the soccer field is commonly used by local residents as an off-leash park during the day. It is not a park commonly used by cyclists or joggers, and the playground area where children play is far away and physically separated by fencing. Dufferin Grove is very easily a park that should be approved to be an official off-leash dog park, provided soccer games are not in session.

There already is a process for applying for off-leash areas. Why not just make it work faster, and approve more of them?

PLEASE, for the sake of everyone, including dog-lovers, please do not implement a blanket bylaw that allows any dog to be off leash at any city park. It is a disaster waiting to happen.